From the Vault: Kristin Hill Combined Two Loves Into One Highly Successful Career

by asaawpadmin
Comments are off 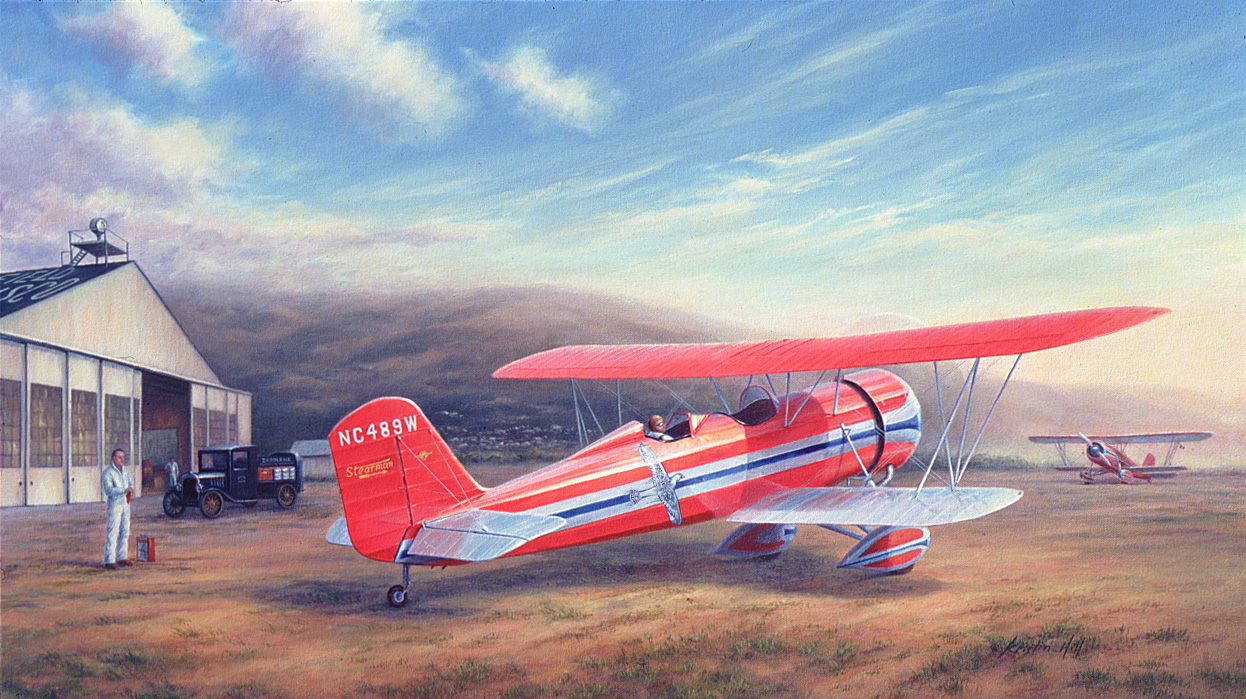 Her mother was an art major at the University of Michigan, and her father spent 36 years as an FBO, so it’s not surprising that Kristin Hill wound up combining those two passions into one. She did so by forging a highly successful career as an aviation artist. 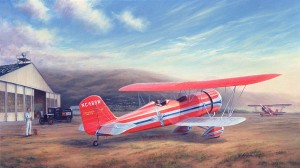 Early on, she discovered the special fascination of flight that pilots know so well, but sometimes find hard to put into words. It’s an important element in all her aviation paintings. Her description of the sensations aroused in soaring through the sky, high above the hills and valleys, rivers and lakes, broad pastures and fields of grain, accomplishes that perfectly. It also puts her emotions about flying and art into a vivid perspective.

“I just think it’s beautiful to be up there,” she says. “I love to see that world and to paint it. I have a thrill whenever I go up. I love the beauty of the sky, the cloud formations, the colors.”

Hill says that’s why skyscapes play such an important part in her paintings.

“I sometimes make sketches of the sky when I’m flying, and use them later as background when I’m painting a plane in flight,” she said.

For all her hours in the air in a wide variety of both civilian and military aircraft, Hill has never gotten a pilot’s license.

“I always enjoyed being able to take the controls and understanding the basics of flight,” she said. “But when it came down to getting a rating and all of the discipline and responsibility that goes with it, I chose not to do it. I found that it was better to have a pilot there. I always ended up becoming so absorbed in the art that it distracted my attention.”

Hill went to Mary Washington College, which had been the girls’ school of the University of Virginia. 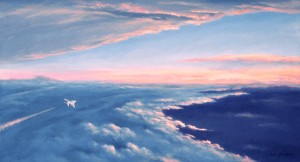 A Brush with Gold”

“My first year there was the first year they went co-ed,” she said. “I graduated in 1976, as a fine arts major. There was little interest in representational art in those days; the emphasis was on abstract art.”

Hill said she didn’t initially think of aviation art, but became interested in it after she got out of college. In 1980, she became a part of the Air Force Art Program, and today a number of her paintings are in the Air Force collection.

“My first flight with the Air Force was in a C-5 out of Dover, Delaware,” she said. “It was a refueling flight and it was listed as a local flight. It lasted five hours. During the flight, the pilot in the left seat ate an apple. I told my escorting PR person that was what I wanted to paint.”

Hill said it symbolized Adam and Eve, good and evil, and health.

“Everybody eats apples,” she said. “At that time we were in a Cold War mentality. The Russians were eating apples and we were eating apples. So I really wanted to focus on the apple and the human aspect of the flight.”

However, the PR person for Dover Air Force Base told her she couldn’t do that, because those in high ranks would consider it inappropriate.

“I called Keith Ferris, one of the major contributors to the Air Force Art Program, and I asked his opinion,” she said. “He said, ‘Why not?’ So I did it. It’s called ‘Universal Apple,’ and it’s in the Air Force Collection. I then realized that an important aspect made possible by the Air Force Art Program is to allow artists outside the Air Force the opportunity to observe and paint their activities, offering a different perspective than one from within the service.”

Hill has flown in a number of Air Force aircraft, including the P-51, B-17 and B-25, and on one flight, she had a frightening experience. She was in an A-37, flying out of Willow Grove Air Base near Philadelphia, when they suffered a double compressor failure right at rotation. The pilot elected not to drop his stores (the auxiliary fuel tanks under the wings) because when released they might travel as fast as the aircraft and could ignite from impact and abrasion. The additional weight would make it harder to stop and he wasn’t sure he could stop before the end of the runway. 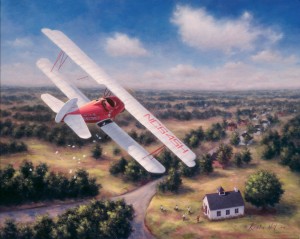 “It was a bitter cold day in February, and there was a strong headwind that helped slow the aircraft down; he was able to stop in time. The only problem he had was hot brakes,” Hill related.

She flew the mission the next day in another A-37. The resulting painting showed an A-37 pilot guiding an A-7 over a frozen river, on the way to the bombing range at Harrisburg.

Hill has flown quite a bit with the Air Force and Air National Guard. Among the aircraft she’s flown in with them are the C-5 Globemaster, A-7 Corsair 2, the A-37, the KC-135 tanker and the F-4 Phantom.

The painting with which Kristin probably most closely identifies with is “Breath of Magic,” which depicts a Pitcairn Mailwing flying low over a river running through a valley in the foothills of North Carolina. There’s a small cabin in a clearing a short distance up the hill from the river, and two people are running down to see the plane go by.

“Weather had pushed the pilot from his regular route from Washington, D.C., to Atlanta,” she explains. “He had been through that valley before and he waved to the people running down to see him.”

The actual plane in that painting hangs at the National Air & Space Museum. “Breath of Magic” was exhibited in the EAA museum at Oshkosh as one of 10 paintings voted “Best of the Best.”

One of Hill’s more striking paintings is “School’s Out Early,” which shows a single-engine Travel Air biplane buzzing a small rural school on a country road. The children have run outside to wave at the airplane. Hill researched that work with a flight she took in a Travel Air.

“We were flying low; the trees were above us,” she recalls. “When we approached the trees, the pilot just pulled up. Whenever I do a flight like that, I like to think we’re back in 1929, and imagine the impact aviation had on people. I love old airplanes.”

At one time, her father owned an old 1941 Meyers OTW (Out To Win) biplane. She did a painting of him propping that aircraft which she called “Reflections on Freedom.”

While working on the commissioned painting “Stanavo Speedmail,” Hill’s talents were employed in the recent restoration of the old biplane when she hand painted the 40-inch Stanavo Oil bird on the sides of the Speedmail. The oil painting of the historic scene portrays the plane at the Standard Oil Company’s 1930 aviation base at Mills Field, now San Francisco International Airport.

“Wings to the Future,” our cover photo this month, depicting the Wright Flyer, commissioned by Global Aerospace, was recently completed. Although she’s painted a host of old-time aircraft, she hasn’t ignored the more modern flying machines. For instance, she did a painting of the Concorde.

“It was a commission by someone at Oshkosh who wanted it painted with the rural background surrounding where it landed,” she says. “It was a piece of civil aviation history.”

A painting she did of a G-IV with beautiful cloud formations in the background, “Rendezvous with Mercury,” won Hill the 2002 Women in Aviation International Award. A woman she met at a WAI conference who flies G-IVs and G-Vs for Universal Studios inspired that painting.

Another G-IV she was commissioned to paint was one belonging to Rolls-Royce. Hill presented that to Sir Ralph Robins, the company’s chairman, at the Chairman’s Luncheon where he was honored on his retirement. “My Transatlantic Dream” shows the aircraft with the New York City skyline in the background.

Hill flew with Denise Waters, who had flown in the London to Sydney air race, to take photographs of the New York harbor and southern Manhattan skyline that would guide her when she did the painting.

She was also commissioned by Raytheon Aircraft to paint the 1,000th Hawker, an 800XP. “The Millennium Hawker” shows the aircraft flying over the rolling hills of England, where it was first produced. These days, she is receiving more and more commissions from major corporations that would like to have paintings of their aircraft. She received one about 20 years ago to do a portrait of Paul Poberezny, founder of the Experimental Aircraft Association, which felt he should be honored while he was alive and not posthumously. That painting, 54 inches long, is entitled “Paul Poberezny—That We May All Dream.”

“I usually don’t do portraits,” Hill said. “If you don’t do it over a period of time, you need to practice to get it back.”

“That’s basically what Paul did,” she said.

Hill also painted George Preddy, the highest scoring World War II ace in the Eighth Air Force. The painting shows symbols on his P-51 for the 17 kills he had at the time. By the time he was shot down and died on Christmas Day 1944, he had 27 kills.

In honor of the Air Force’s 50th Anniversary, Hill painted an F-4, one of her favorite airplanes, flying away from the viewer toward gold and orange clouds, which symbolized the fact that the aircraft was near the end of its many years of active service, flying off into history. The gold clouds in “A Brush with Gold” symbolize the golden anniversary.

Kristin Hill’s dad, Dudley Hill, who provided her introduction to aviation, had been a test pilot for Ercoupe when the factory was located near College Park Airport in Maryland, not far from the nation’s capital. During World War II, he went out to Phoenix for Ercoupe to help instruct on putting the turrets in PB4Y2s.

“Bob and Dick Sanders, who had purchased manufacturing rights from Erco, owned and operated Sanders Aviation,” Hill said. “They later passed it on to dad who operated it as Erco Field Aviation Service. Then he moved to Lancaster in 1954 or 1955, where he operated the FBO, Hill Aviation, for 34 years.”

He’s 83 now, retired, and still lives in Lancaster. Her mother, who hadn’t painted for many years because of other activities, is now back at her easel.

Discussing the elements that go into a painting, Kristin says, “Painting an aviation picture is like putting together a puzzle. You have to put together many pieces—research information, artistic elements like composition, the tonal values, the colors, the rhythms, factual information, the lighting, what the client wants if it’s a custom commission. You have to figure out those puzzle pieces in order to get a good painting.”

Hill said she thought it would get easier to paint over the years, but she has found that it takes me as long or it gets harder because you understand how many more puzzle pieces truly exist to put in the work and you also expect more.

“I start out with small sketches, little things where you get energy and composition and that sort of thing,” she said. “Then they get a little bigger, with more detail. I do little pencil sketches, not to get more detail, but to get shapes and energy, the view of the airplane. Then I do color sketches to integrate tonal and color values so the airplane and the background work well together. The first couple of years I didn’t do that. I tried to work it out on the canvas and that’s even worse. You can throw out a sketch if it’s not working.”

Hill has put together a lot of puzzles over the years—adding up to some 250 paintings. And there will be a lot more, since she is working on a backlog of commissions. 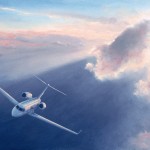 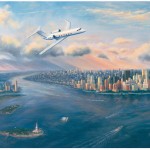 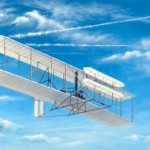 About the Author
©2016 American Society of Aviation Artists